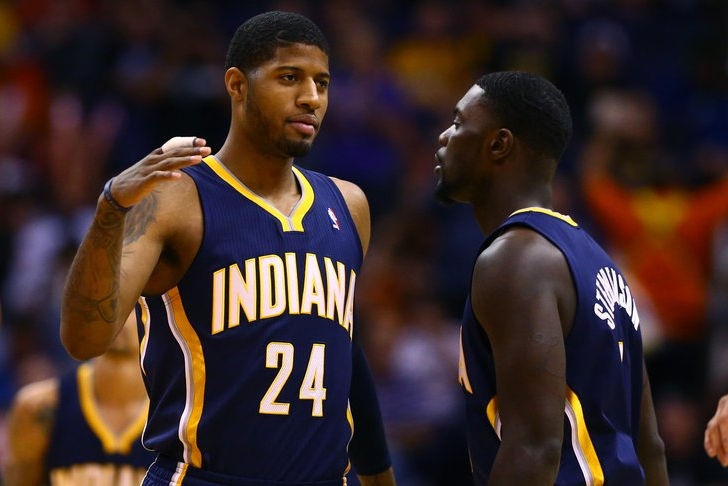 After a season that looked like Indiana's best shot at the NBA Finals since 2000, the Pacers are watching the Spurs & Heat battle it out on TV.

For the first time under Frank Vogel, Indiana failed to advance one step further into the playoffs - and as a result, the organization has been the subject of criticism ever since their final Eastern Conference Finals game against Miami.

As much as people want to know exactly what caused Indiana's struggles, nothing can be done about it now. Larry Bird must begin to focus on the offseason, and he faces tough questions about who to re-sign and who to let go.

With the offseason already in full swing for Indiana, we present the five most valuable Pacers - these players are integral to the future success of the franchise, from fifth-most to the most valuable asset.

Regarded as the weakest link of the Indiana Pacers starting five, Hill was at the very least consistent in his mediocrity. He maintained a quiet, almost zen presence on and off the court over the course of his fifth NBA season, and once he gets a little fire in him (perhaps a la Lance Stephenson?), Hill can mature into a offensive force for a team that badly needs more offense. We saw flashes of it in his best offensive game of the season on February 7th against Portland, when he went off for 37 points on 12-19 shooting.

The only player on this list who isn’t a starter, Watson, already an NBA vet, keeps showing flashes of the player he can be when firing on all cylinders. He performed admirably in the postseason, primarily playing while subbing for Paul George - especially against the Heat - on both ends of the floor. If Bird spends some time with Watson this summer, he can help mold him into someone who can give Indiana a weapon off the bench, which continued to struggle this season.

[caption id="attachment_193" align="aligncenter" width="300" caption="Watson has the potential to blossom into a secret weapon for Indiana."]

Say what you want about Stephenson’s unique methods of getting into opposing players’ heads in the playoffs, but there is no questioning his value to the team following a breakout season. Leading the league in triple-doubles during the regular season and headline-grabbing antics during the playoffs, Stepheson plays like a deranged man who will do anything to help his team win. A bona-fide contender for the league’s Most Improved Player award this season, Stephenson has already convinced Larry Bird to re-sign him in a bid to help keep Indiana in contention for the near future.

Arguably the team’s MVP of the season down the stretch - and unquestionably its leader - West was the consistently strong force for Indiana when things started falling apart for the squad. He imposed his will in the playoffs, at times being the sole reason that Indiana got to play one more game. The Pacers could benefit greatly from bringing his fire and leadership back.

A legitimate MVP candidate when Indiana got out to a raging start to the season, George continued his torrid year-to-year improvement as he blossomed into a legitimate superstar. A force from virtually everywhere in the court, George not only dominated on the offensive end, but was also in the running for Defensive Player of the Year as well. He and West led the Pacers and some of his performances were reminiscent of another Indiana superstar, Reggie Miller. As long as he continues to grow and keeps the memory of the last two postseasons ending abruptly in the back of his mind, George will continue to be the face of the franchise at just 24 years old.