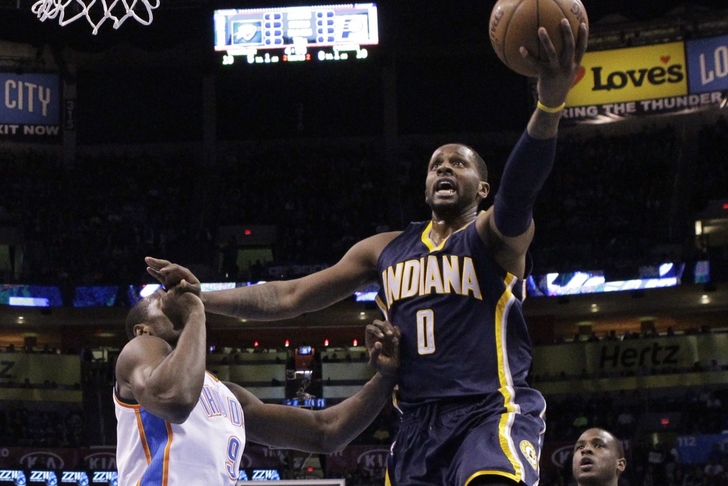 In a crucial battle between teams on the outside of the 2015 NBA Playoffs race looking in, the Indiana Pacers and Oklahoma City Thunder engaged in a back-and-forth clash worthy of teams fighting for their postseason lives.

However, it was the Pacers who outdistanced the Thunder (and a HUGE night from Russell Westbrook) in front of their home faithful, cementing a perhaps season-saving 116-104 victory at Bankers Life Fieldhouse.

The victory pulls Indiana virtually even with the Nets at 37-43 for the East's #8 seed with two games left (Nets hold the tiebreaker).

Oklahoma City shot an abysmal 11-of-28 from the free-throw line (39.3%). Those charity stripe woes meant the difference between a close win and a crushing loss - one which places OKC a half game behind New Orleans (with Sunday's game pending) with two games left to go.

The other key stat? The #16. Russell Westbrook picked up his 16th technical foul on Sunday, and could very well be suspended for OKC's next game if the NBA doesn't rescind the call.

CJ Miles wore a superhero's cape on Sunday, dropping 30 points (including a killer late three with under a minute to go) and pulling down 10 rebounds in a fantastically clutch double-double effort for the home-standing Pacers.

Indiana stays home for a code-critical Eastern Conference clash with the Washington Wizards on Tuesday, while OKC heads home tonight to get ready for a home showdown with the Portland Trail Blazers on Monday.