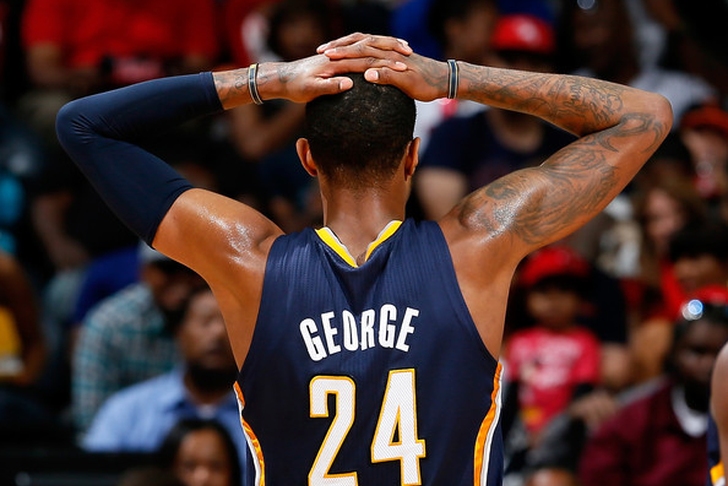 It’s the classic “told you so” story. The overconfident, bright-eyed teenager gets behind the wheel of the car for the first time, with the whole world ahead of him.

Overconfidence leads to a speeding ticket here, a rear-end accident there. But, c’mon, what’s the worst that can happen?

Enter the Indiana Pacers: the cocky new kids on the block who rarely take a hint, often refuse to learn from mistakes, and who may see their dream season come to a crashing halt if their mistakes catch up to them.

Pre-season hype for the Indiana Pacers began nary a day after the conclusion of last season’s epic seven-game Eastern Conference Finals with the Miami Heat . The Pacers lived up to the sky-high expectations, beginning the season scorching hot­–the team had a 33-7 record on Jan. 20, far and away the best record in the NBA.

Life was bliss. The “Blue Collar Gold Swagger” boys were the talk of the NBA. Paul George was appearing in Gatorade commercials. Frank Vogel was even getting in the act with a spot of his own. Bankers Life Fieldhouse was filled to the rafters night in and night out for the first time in a decade.

The Mercedes Benz was firing on all cylinders.

Then, George ran a red light.

On February 5, rumors came to light that the up and coming superstar had impregnated a Miami exotic dancer. George did not deny the accusations.

Nevertheless, the Pacers still owned the best record in the league at 46-14 on March 4.

March was unkind to the class of the Eastern Conference. The team went 8-10 during the month. Their offense was inconsistent at best and stagnant at worst. They lost to bad teams (see Golden State, Charlotte, Cleveland) and good teams (Chicago, San Antonio) alike.

The month also featured an anxiously awaited rematch with the Heat, which the Pacers pulled out by a slim margin.

Yet in the heat of a battle for the No. 1 seed in the East, the Pacers fell flat at home versus Atlanta…then turned around and beat Oklahoma City in the regular season finale.

Who is this team?

The questions continued as the playoffs began. Many assumed, even in spite of the Pacers late season struggles, the No. 8 seed Atlanta Hawks would be a cakewalk. Yet, it was the No. 1 seed Pacers who found their season on the line and had to win consecutive wins to stave off an early exit from the postseason spectacle.

Questions marks loomed large again: Was it the coaching? Personnel decisions? Maturity? Lack of effort? Too much intensity?

The small size of the Hawks that supposedly haunted the Pacers would be replaced by the bigger size of the Washington Wizards. But again, the Pacers lost the opening game. They reeled off three straight wins before dropping game five.

Call it what you want–flirting with danger, speeding by a cop­–the result normally isn’t positive.

Nonetheless, the smug Pacers escaped again, with a game-six win.

Despite all the turmoil, the matchup was set once again. Pacers Heat.

The Pacers won game one in convincing fashion, and it looked like all was right with Pacer Nation.

Then, they dropped game two, a heartbreaking loss that would have put the two-time defending champions in an unenviable spot.

contentious postgame trash talk with LeBron James that set off a barrage of fireworks, both

from within Stephenson’s own locker room and from the other side.

You speed past the sheriff? You better be able to outrun him. Good luck.

Once again, the pompous kid who had it all was facing the punishment of elimination.

A marvelous performance by Paul George saved the Pacers’ season for one more day,  setting up yet another do-or-die game Friday night.

The kids have been bending the rules for months–violations here and there, some big and some small.

To this point, they have been Houdinis managing to escape time and time again.

Only time will tell if they can keep up the act, or if they will find themselves behind bars for the summer, wondering what could have been.