Heat vs Pacers Preview: A Series One Year in the Making 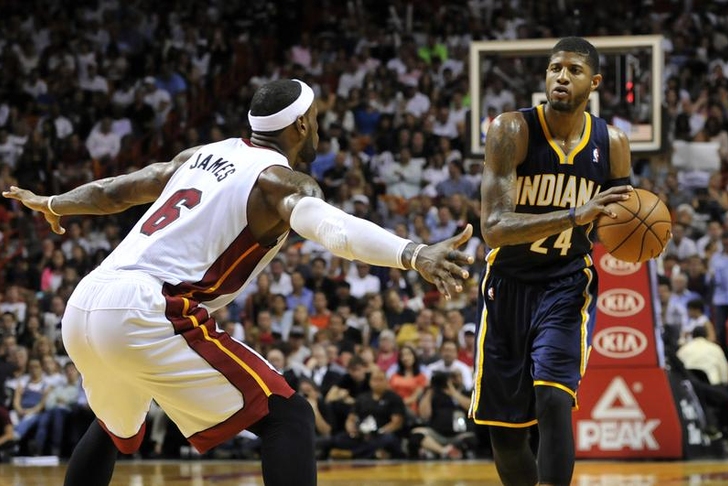 It is the series of the year: the Indiana Pacers versus the Miami Heat for the right to represent the East in the NBA Finals. This match-up, on this stage, has been built up and hyped over since the final buzzer sounded at the end of last year's Eastern Conference Final Game 7 which propelled Miami to their third consecutive Finals appearance and second straight title.

For all the hype, many thought this series would not happen. After the Pacers' inexplicable collapse, all the drama surrounding Paul George, and Roy Hibbert's jaw-droppingly awful performances in the first and early second-round games it seemed this team just could not live up to expectations. If the Pacers had lost in either of their first two series, it would have been nothing short of a catastrophic disappointment for the city of Indianapolis (who trust me, has had their fair share of post-season disappointment).

Thankfully for the Pacers (and the NBA for that matter), the team has been able to rally from their recent woes on the court and now find themselves face-to-face with the team they have been waiting for all season.

It's Good vs Evil, Light vs Dark, Cornfields vs Beaches, whatever you want to call it, it's the 2014 Eastern Conference Finals.

[caption id="attachment_77" align="alignnone" width="300" caption="James and Wade have met very little resistance on their way to the ECF."]

The Pacers enter the series winners of a stressful seven-game series with Atlanta and a challenging six-game series against Washington giving the team very little time for rest. The Heat have taken a slightly different route, sleepwalking through a four-game sweep of Charlotte and beating the Nets in five games, giving the team plenty of time for rest and rehabilitation.  Because of their success, the Heat have experienced little drama throughout the playoffs and seem to be playing their best basketball, leaving behind the minor slump they experienced prior to the end of the season.

[caption id="attachment_76" align="alignnone" width="300" caption="Roy Hibbert has had some of his best games against the Heat and the Pacers need him now more than ever."]

Much of Indy's resurgent success against Washington can be hung on center Roy Hibbert's seeming return to form, headlined by a 28 point, nine rebound game two. The Pacers are going to need Hibbert at his best when they face the Heat. In the four regular season games this season Hibbert averaged 14 points and three rebounds. Last season, Hibbert was seemingly unstoppable. For the Heat, this area is a big question mark. Will Greg Oden be healthy and ready to try and match up against Hibbert? Will they be forced to rely on Chris Bosh and Chris Andersen? Both of these two had good performances against the Pacers last year, but if Hibbert can play like the Hibbert everyone fears, it will give a huge edge to the Pacers.

[caption id="attachment_84" align="alignnone" width="300" caption="Coach Frank Vogel almost willed his team to the upset last season. Can he have better success this year?"]

Frank Vogel has had it pretty rough these past couple of months. His team has been playing historically bad, his best players have played inconstantly, he has been blasted by the media, and to top it off he has to listen to rumors about his job security. Through it all Vogel has remained calm and collective, leading his team to the number one seed in the East and grinding out tough wins to reach this point. Erik Spoelstra is a fine coach and deserves a lot of credit, but he does not need to play nearly as big a role as Vogel for his team.

Paul George decided to hold his "superstar coming out party" during last year's playoff series with Miami. During the seven-game series, the world became quite aware of George's talents as a shooter and defender. Since then, George has risen to the ranks of one of the NBA's elite players. The leader of that pack, the majority would say, is LeBron James. The man's resume as a scorer and defender needs no introduction. That is what made for such an intriguing match-up last season, and would seem to be this year. Both are tenacious defenders, among the best in the league. Both can light up scoreboards, scoring from anywhere on the floor. What is the biggest difference between the two? Consistency. With James, you always know where he is. Probably because he is lighting up your defense. George has definitely come into his own and still has his best basketball ahead, but sometimes he can drift into the background, bouncing around scoring 39 points in one game, then turning around and only putting up only 12. The success of the Pacers does not hinge on the success of George like the Heat do on James, making him the best and most important player on the floor.

This is the marquee series of the season that everyone has been waiting for. There is no lack of intrigue heading into the games, but come Sunday afternoon, none of that will matter. Soon the players will take the court at Banker's Life Fieldhouse and the NBA's hottest rivalry will begin a new chapter. In the end, the Pacers will play hard and keep themselves in every game, but the consistency of the Heat and the strength of their top players will again be too much for the Pacers to handle. I'll take the Heat in 6 games.