5 Things the Pacers Must Do to Save Their Season 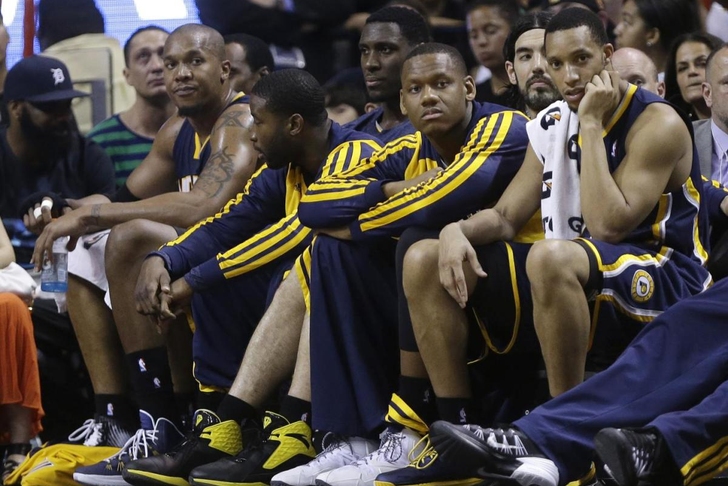 After a dominant performance in Game 1, the Indiana Pacers now find themselves down 3-1 against the Miami Heat, and after Monday night's debacle, it seems the wheels have come completely off.

The Pacers' season is on the brink in a "win or go home" situation at home Wednesday. To pull off a miracle comeback and advance to the NBA Finals, the team must win their next three games in a row: a feat accomplished by just eight teams in NBA history.

So in the words of Lloyd Christmas, "So you're saying there's a chance!"

There is a chance; albeit a very, very slim one. If the Pacers are to do what only a handful of teams have done before, there are several key things they must accomplish.

Two of the Pacers' star players have been at the center of controversy this week thanks to their insistence on stirring the pot with inflammatory statements to the media. Before game 4, Lance Stephenson claimed that LeBron James was showing a "sign of weakness" by trash talking Stephenson during the previous game.

Stephenson believed that he had gotten inside James' head and was trying to get even further under his skin with his statements. James responded with 32 points, 10 rebounds, five assists and two steals. Obviously, it didn't phase him.

Paul George found himself in a similar situation following the 102-90 loss Monday. During his post-game press conference, George claimed that the Pacers had actually outplayed the Heat (a statement that was obviously false).

George went on to say that it was free throws that ultimately decided the game, with Indiana going 11-17 and Miami shooting 30-34 at the line. George insinuated there was clear favoritism on behalf of NBA officials, claiming that there was "home-cooking" going on. This public criticism landed George a $25,000 fine from the NBA.

Do you see a pattern here?

Nothing good comes from jawing off the court and giving the other team bulletin-board material. Note to the Pacers: STOP TALKING AND LOOK AT THE SCOREBOARD. YOU ARE NOT HELPING YOURSELVES.

In this day and age in the NBA, it's inexcusable for a 7'2", 290 lbs center to go scoreless in a game - especially in a series of this magnitude. Alas, that's exactly what happened in Game 4.

Hibbert's only real contribution to the game was five rebounds, which is also not impressive considering his size. Hibbert only shot the ball four times the whole game. I repeat, four times the entire game. Hibbert has show in the past that he can be a one-man wrecking crew against the Heat, who have no real answer to his presence.

The Pacers need to get Hibbert the ball in the post early and often. The ball should touch Hibbert's hands at least once a possession. No excuses. If the Pacers are going to comeback and win the series, Hibbert needs to take a minimum of 13 shots.

If Indiana is to come back, they can no longer lose the turnover battle. This means eliminating the risky passes that Paul George loves so much. The Heat deployed a full-court press for most of Game 4, and there is no reason to believe they will not continue given their success.

Miami, now playing with a large cushion, are going to play ultra-aggressive defense, so Indiana needs to be extremely aware on the court for steal attempts by James and company.

4. Play With a Sense of Urgency

The Pacers need to play like they're down 3-1 in the Eastern Conference Finals. Too many times during the playoffs, we've witnessed the Pacers taking their time getting up and down the court after rebounds.

Ever since the All-Star break and the beginning of the team's second-half slump, the Pacers have seemed lackadaisical at times. They almost looked uninterested in playing anyone but the Miami Heat. Now that they have them, they still seem to keep the same attitude and body language. Another issue occurs when the Pacers have the ball. There is very little movement on offense.

5. The Bench Must Step Up

The bench killed Indiana last year and if nothing changes in the all-important Game 5, it will be their undoing once again. To his credit, Luis Scola has performed well in the team's last two losing efforts. Outside of Scola, the Pacers' bench has been virtually non-existent.

Only averaging 17 points a game collectively, the bench is going to need a big night. The few crucial minutes when James and company take their breaks are when Indiana must strike. If their bench cannot perform better than Miami's bench, there is zero chance of an upset. Ian Mahinmi must do his best Roy Hibbert impression. C.J Watson must contribute with three-point shooting. Chris Copeland has only seen the floor in junk time, but has provided a lift for the team in games past and deserves a chance to try and make his mark. Rasual Butler has provided some surprising contribution and needs to keep consistency up when he gets his chances. Evan Turner, on the other hand, needs to keep doing what he has been doing all series: sit.

If the Pacers can stick to this gameplan, there is still hope for their season. If not, they'll be forced to spend another year watching the Finals from home with the rest of the league.