Shoot to Win – IU's Summer of Work Has Begun 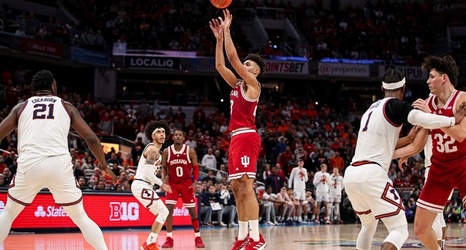 BLOOMINGTON, Ind. – The outside shooting truth is out there.

Can you see it?

Evidence was displayed in last week's fourth quarter of Boston's take-no-prisoners rally against shot-happy Golden State in the opening game of the NBA finals.

Will the Indiana Hoosiers see, commit and deliver?

That is the key off-season question, and the answer will likely determine IU's basketball championship prospects for next season, and beyond.

"I'm hoping the summer work that these guys are putting in," coach Mike Woodson says via recent Huber Farms media availability, "that it pays off for us because we are going to need everybody to shoot on the perimeter, everybody to be able to make that shot.