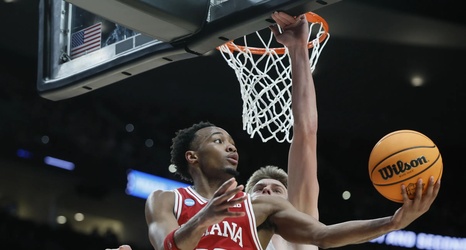 If convincing Trayce Jackson-Davis in early April 2021 to return to Indiana for his junior year was Act One of dismantling some observers’ perception or even prediction that Indiana men’s basketball coach Mike Woodson wouldn’t be able to recruit at a high level, then Woodson landing blue-chip recruit Tamar Bates was Act Two, after Bates reopened his recruitment following Shaka Smart’s move from Texas to Marquette.

Bates, ranked by the 247Sports Composite rankings as a high-end four-star recruit and the No. 30 player in his recruiting class, ranks as the program’s 10th-highest-rated recruit in the modern era, according to 247Sports, wedged between his 2022 teammates Khristian Lander and Trayce Jackson-Davis.