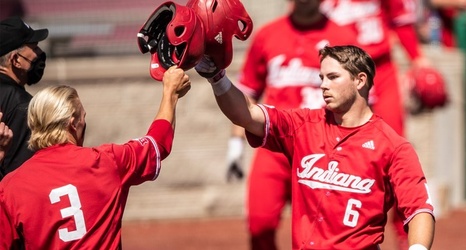 SETTING THE SCENE
• The Indiana Hoosiers will host the Iowa Hawkeyes for three games in matchup of two of the top-four teams in the Big Ten at Bart Kaufman Field in Bloomington, Ind.

• This past weekend, Indiana swept a three-game series against Minnesota at Bart Kaufman Field, out-scoring the Golden Gophers in the three contests, 39-5. IU won the finale in emphatic fashion on Sunday, 23-1.

• Jeff Mercer is in his third season at the helm of the Indiana baseball program. He led the Hoosiers to a Big Ten regular season title in 2019, earning him Big Ten Coach of the Year honors.