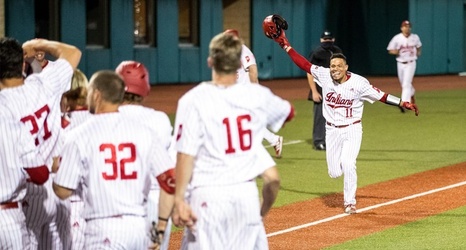 SETTING THE SCENE
• The Indiana Hoosiers (24-12) will host the Illinois Fighting Illini (18-19) in a midweek contest on Tuesday at Bart Kaufman Field in Bloomington, Ind. The game is a makeup of the series finale between the two teams scheduled for April 11 that was postponed due to weather.

• In the series earlier this year, Indiana won both contests, each in dramatic fashion. On that Friday, C Collin Hopkins hit a walk-off, two-run homer in the bottom of the ninth to give IU a 6-4 win. Then on that Saturday, RHP McCade Brown and RHP Braydon Tucker combined to no-hit the Illini en route to an 8-0 win for the Hoosiers.