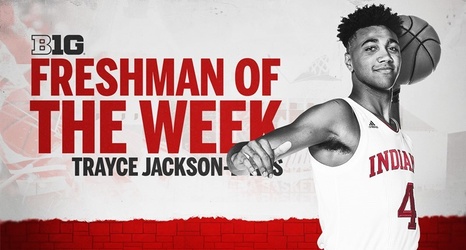 BLOOMINGTON, Ind. - The Big Ten Conference has named Indiana forward Trayce Jackson-Davis as its Freshman of the Week after the Center Grove High School product averaged 20 points and 12.5 rebounds in wins over Louisiana Tech and South Dakota State. It is the second time he has received the award this season. He was also honored by the league on November 18.

He had a season-high 21 points and 11 rebounds against Louisiana Tech and made 11 of 13 free throws in the game. Against SDSU, he had 19 points and matched his season-best with 14 rebounds and 4 blocked shots.