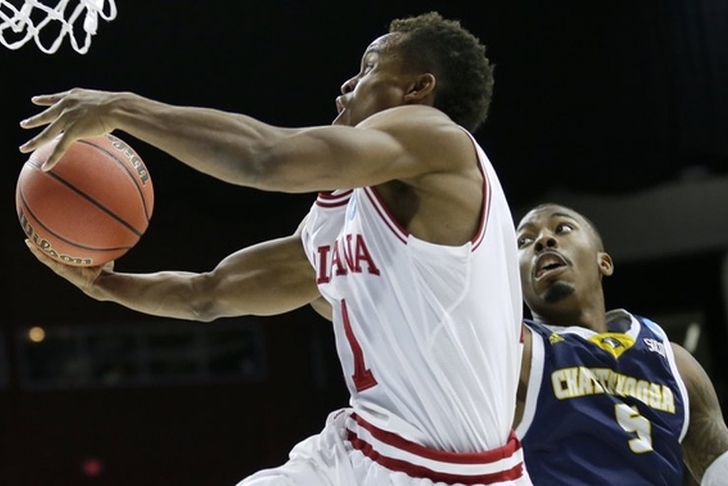 The Indiana Hoosiers quickly dismantled Chattanooga in their first round matchup, setting up a massive showdown against their longtime rival and fellow college basketball power Kentucky Wildcats. Many think this game is a toss up, but we aren't convinced. Here are three reasons why Indiana is guaranteed to beat Kentucky today:

3) Unstoppable offense
Indiana has always been an offensive team under head coach Tom Crean, but they’ve become somewhat of a juggernaut this year. On top of ranking 11th in the country in scoring (82.7 points per game), the Hoosiers do it efficiently, shooting 50.2 percent from the field and 41.9 percent from three-point range. They will barrage you with shots from the perimeter, but Thomas Bryant gives them an inside presence that makes them a truly well-rounded offense.

2) Kentucky's inconsistency
Kentucky has gotten a lot of praise over the last two months for turning their season around, winning 11 of their last 13 games, but that doesn't tell the whole story. Only three of those games came against teams currently in the NCAA Tournament, and the Wildcats are just 1-2 in those games - with the one win coming in overtime. Look for them to struggle against a Indiana team that can match their talent level.

1) Yogi Ferrell > Tyler Ulis
No player in the country means more to their team than Yogi Ferrell does to Indiana. He has been the heart and soul of the Hoosiers for the past three years, and he has been able to elevate the play of everyone around him this season through his leadership. Indiana isn't the most talented team in the Big Ten, but Ferrell essentially willed them to a conference title.

Aside from the intangibles, Ferrell is also one of the best point guards in the country. Indiana’s offense relies on him to create his own show and create opportunities for his teammates, both of which he does thanks to an uncanny ability to get into the lane and a deadly step back jumper. He'll be able to get his shot off over the much smaller Tyler Ulis, and will use his strength to get to the basket whenever he wants.