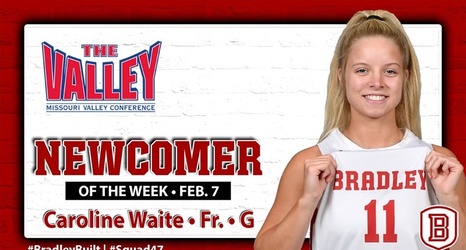 ST. LOUIS – Pacing the Bradley women's basketball team with 22.5 points per game during its weekend split against Indiana State and Evansville, while earning the No. 10 spot on the ESPN SportsCenter Top Plays feature, freshman guard Caroline Waite (Ames, IA/Ames HS) has been named the Missouri Valley Conference Newcomer of the Week for the second time this season, according to an announcement from the league office Monday afternoon.