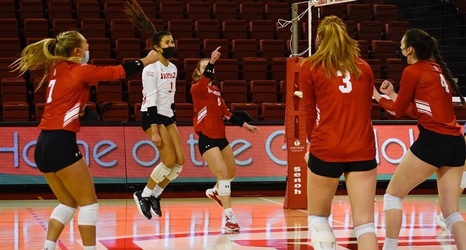 PEORIA, Ill. -- Juniors Hannah Thompson and Kora Kauling each turned in double-doubles and Bradley Volleyball fell one dig short of matching the school record for digs in a three-set match as the Braves completed the regular-season series sweep of Indiana State Monday at Renaissance Coliseum with a 25-23, 25-17, 25-15 victory over the Sycamores.

Thompson, who joined Mary Kay Schmidt (1990-93) as the only players in program history with 800 career kills and 1,200 or more digs, finished with 10 kills and 20 digs to go with three blocks. Kauling nearly had a double-double in the first set (eight assists & nine digs) and closed the night with 27 assists and 14 digs in addition to finding the floor with seven kills while hitting at a .