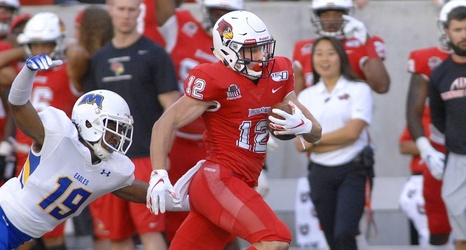 Grimes and Woods aren’t just anxious for the Illinois State football season. Both say they are physically healed after surgeries as well.

“It feels great. I’m in the last phase of my rehab,” said Woods, who underwent shoulder surgery in December shortly after the Redbird season ended. “I’m close to being 100 percent.”

“I would say I’m 100 percent right now, ready to go,” said Grimes, who missed the remainder of the season after suffering a torn knee ligament on Sept. 21. “ACL (anterior cruciate ligament) rehab is tough, but it went smooth.”

Woods and Grimes are among several key Redbirds coming back from injuries.