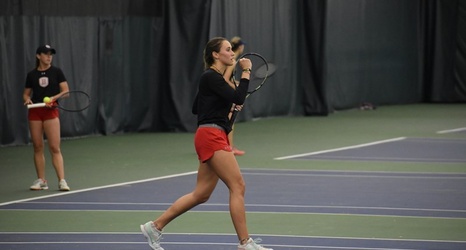 PEORIA, IL – Bradley dominated the tie-breakers and used the extra points to end a 3-match losing streak against Southeast Missouri State (2-6) by pulling out a 5-2 dual match victory against the visiting Redhawks Friday evening at the Clubs at River City.

The Braves (6-4) won all four sets that went to tie-breakers en route to their fourth consecutive victory. Bradley had dropped 4-3 decisions to Southeast Missouri the last two years and had not beaten the Redhawks since 2011.

The tie-break success began during doubles play, when the No. 2 pairing of sophomores Bozana Lojpur/Nikki Perlwitz rallied for a 7-6 (9) victory to secure the team doubles point.