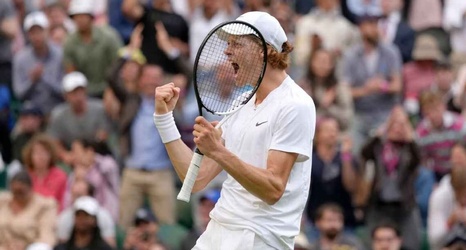 Jannik Sinner outdueled Carlos Alcaraz in a matchup of up-and-comers Sunday to reach his first Wimbledon quarterfinal, although he needed six match points to put his opponent away.

Sinner, 20, failed to convert two match points in the third-set tiebreaker but recovered to win 6-1, 6-4, 6-7 (8), 6-3 on Centre Court against the 19-year-old Alcaraz. In terms of combined age, it was the youngest men's singles matchup in the round of 16 or later at Wimbledon since 1985, when 17-year-old Boris Becker beat Henri Leconte in the quarterfinals.

The 10th-seeded Sinner had three more match points at 5-2 in the fourth, but the No.