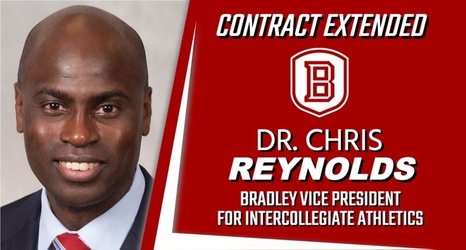 PEORIA, IL – Having overseen an unprecedented run of competitive success during the first six years of his leadership, Bradley University has extended the contract for Dr. Chris Reynolds, Vice-President for Intercollegiate Athletics. Specific terms of the contract will not be made public.

Reynolds became Bradley's 10th director of athletics March 17, 2015 and has steered the Braves to across-the-board success in competition, in the classroom and in the community, while also representing Bradley University on the national stage.

"Chris is a world-class athletic director who is regularly recognized by his peers," said Bradley University President Stephen Standifird.