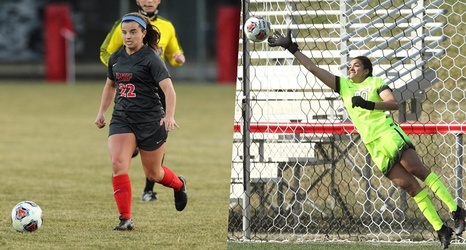 CHICAGO – Illinois State soccer's Abby Basler and Priya Gillan were named to the Missouri Valley Conference All-Tournament Team, announced by the league Sunday at the conclusion of the title game.

Basler, a redshirt senior from St. Louis, Mo., played in every minute of ISU's postseason run, taking 10 shots, six of which she put on goal. The midfielder converted ISU's first penalty kick in their double overtime shootout tie breaker versus UNI (Apr. 11) that saw the 'Birds advance, 3-0 in PKs. Basler, who led the team this spring in nearly every offensive category, including goals (4), assists (3), points (11), shots (43) and shots on goal (20), has been recognized as an All-MVC honoree three times in her career and on the MVC All-Tournament Team previously in 2018.