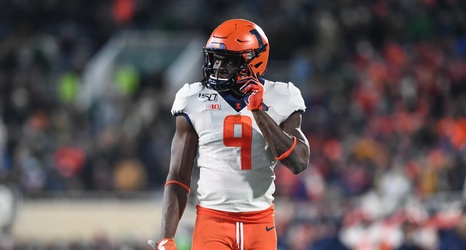 Josh Imatorbhebhe has signed with a team we call Illinois South, the Jacksonville Jaguars.

Imatorbhebhe went undrafted during the 2021 NFL Draft, but will get a chance to catch balls from No. 1 overall pick Trevor Lawrence and be coached by former Ohio State head coach Urban Meyer.

The 6-foot-2, 220-pound Imatorbhebhe started 18 games in his two seasons in Champaign, snaring 55 catches for 931 yards and 12 touchdowns.

Lance Zierlein of NFL.com views Bhebhe as a future backup/special teamer and had plenty to say in his evaluation:

With an impressive frame and elite testing numbers, it is becoming more likely that a team will be willing to overlook the underdeveloped aspects of Imatorbhebhe’s game in hopes of cashing in a jackpot if it can unlock enough skill to go with the traits .