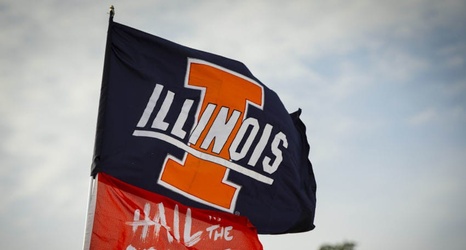 CHAMPAIGN, IL - SEPTEMBER 21: An Illinois Fighting Illini flag is seen in the tailgate lot before the game against the Nebraska Cornhuskers at Memorial Stadium on September 21, 2019 in Champaign, Illinois. (Photo by Michael Hickey/Getty Images)

After the recruiting “dead” period, Illinois football target Felix Hixon will make his way to Champaign for an official visit on June 11.

Hixon made the news official via Twitter on April 24. The defensive end and 2022 prospect will make his official visit to Champaign on June 11 to get a taste of the Illini program.