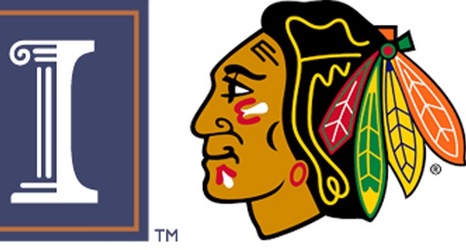 Tonight's Chicago Blackhawks game against the Arizona Coyotes will feature a promotion for University of Illinois fans, and that isn't sitting well with a longtime critic of Chief Illiniwek.

Stephen Kaufman wrote to Chancellor Robert Jones and other UI officials recently complaining about an orange-and-blue baseball cap to be given to fans at the event. The hat features the university's Block I and the Chicago Blackhawks logo, a profile drawing of an American Indian.

"This endorsement of the Blackhawks and the merchandising of the Block I symbol with the Blackhawks logo does the campus an enormous disservice and disregards thirty years of objections to the use of Native American imagery by the campus that has been repeatedly voiced in the UIUC Senate," Kaufman wrote to campus senate leaders last week.