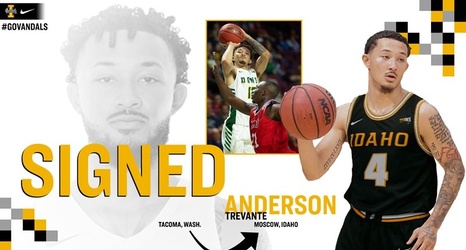 MOSCOW, Idaho – Idaho men's basketball has announced the signing of Trevante Anderson, a transfer from the University of San Francisco.

"We are incredibly happy to add Trevante to our program. He is going to add a level of toughness, skill, and competitive spirit that we were looking for," said head coach Zac Claus. "We also believe that he will bring with him some natural leadership qualities that will propel us moving forward. This is yet another positive day for Idaho basketball."

Anderson played the last three seasons for the Dons. During that time, USF won 54 games, highlighted by a 22-win season in 2019-20 which ended in a WCC semifinal loss to Gonzaga.