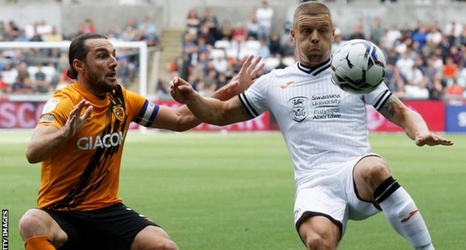 Swansea City were held to a goalless draw by Hull City which leaves Russell Martin still waiting for a first home league win at his new club.

Swansea dominated the contest for long periods but struggled to open up a resolute Hull rearguard.

Matt Grimes came closest to a goal with a sweet free-kick which was pushed onto the post by Matt Ingram.

The stalemate leaves both sides with only one victory from their opening six games of the Championship season.

There were some promising signs in this Swansea performance for Martin, the former MK Dons boss who took charge just six days before 2021-22 campaign began.