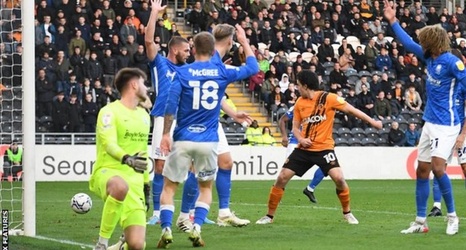 Goals from George Honeyman and Mallik Wilks hauled Hull out of the bottom three as they overcame 10-man Birmingham City.

Midfielder Honeyman put the Tigers ahead with a controversial strike after Ryan Longman appeared to take the ball out of play in the build-up.

The visitors went down to 10 men just before half-time when Gary Gardner was shown a straight red card for headbutting Josh Magennis.

Wilks wrapped up the points after the break, heading in Keane Lewis-Potter's cross to seal back-to-back wins for the first time this season.

Hull, who were missing defender Josh Emmanuel - now discharged from hospital after he was taken ill during training on Thursday - began the game with the division's worst scoring record of 11 goals, only five of those on home turf.