What If? The 2008 Texans, A Season Determined By Two QB Scrambles 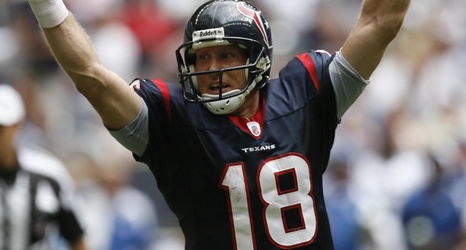 The 2008 season. In merely glancing at the numbers, you would find a season where the Texans finished with their second straight non-losing campaign (8-8). The squad set offensive records for the team, finishing 3rd in offense. Andre Johnson did Andre Johnson things, and Steve Slaton emerged as the latest 1000 yard rusher. The team even managed to win its first Monday Night Football matchup.

Yet, not all was great in 2008. Even before the first kickoff, the season saw a major upheaval. Hurricane Ike caused enough damage to Houston to force the league to shuffle the schedule.