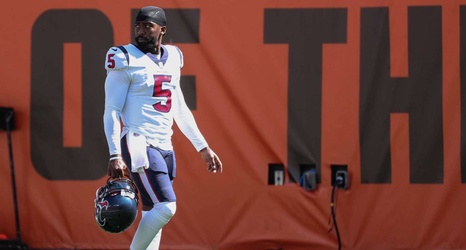 Houston quarterback Tyrod Taylor is day to day with a hamstring injury as the Texans face a quick turnaround with a Thursday night game against Carolina.

If Taylor can’t play, Deshaun Watson will not be an option, with coach David Culley saying Monday that Watson would be inactive for Thursday’s game just as he has been for the first two games. Culley caused a bit of a stir after Sunday's game when he was asked if Watson could play Thursday and he responded by saying, "We'll have to see."

Watson has been listed as inactive/not injury-related following his trade request and after 22 women filed lawsuits alleging sexual assault or harassment.