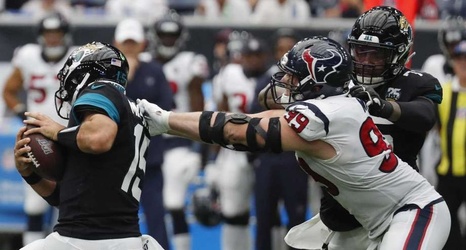 Texans defensive end J.J. Watt is managing to make an impact despite being surrounded by blockers.

The extra attention, including double-team and triple-team strategies and some blatant holding penalties that weren't called, have impacted his statistics.

Watt has two tackles this season and zero sacks with one fumble recovery in two games since the Texans traded three-time Pro Bowl outside linebacker Jadeveon Clowney to the Seattle Seahawks. He has created opportunities for his teammates with outside linebacker Whitney Mercilus capitalizing for three sacks.

"Well the fact that they have to double and triple him, that says a lot about how they feel about him, and then how also it affects the other guys on the defense, because if they're going to double and triple team him, other guys are one-on-one and they have to be able to take advantage of those one-on-ones and have some wins," Texans defensive coordinator Romeo Crennel said.