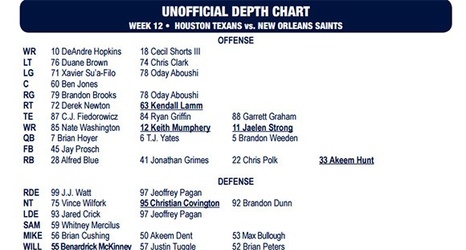 The Houston Texans (5-5) will welcome the New Orleans Saints (4-6) this week for a Sunday afternoon game at NRG Stadium. Kickoff is set for noon CT.

Houston is enjoying a three-game winning streak, which is the third-longest active streak in the AFC and the team’s longest since 2012. The Texans hold a 1-2 record in the alltime head-to-head series but won their last home game against the Saints. Houston picked up its fifth victory of the season last week at home against the New York Jets by a score of 24-17. WR DeAndre Hopkins scored twice in the game, bringing his total for the year to nine, which ties Andre Johnson for the most receiving touchdowns in a season in franchise history.

See full article at Official Site of the Texans