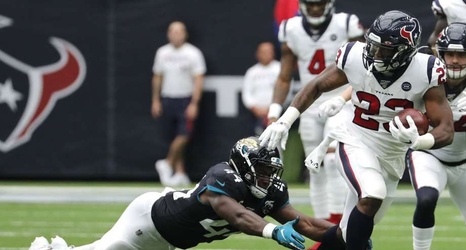 The downhill running style of veteran running back Carlos Hyde has given the Texans' offense a different personality.

Ranked fifth in the NFL with 173 rushing yards through two games, the former San Francisco 49ers second-round pick from Ohio State has emerged as an excellent replacement with Lamar Miller out for the season with a torn anterior cruciate ligament.

"Carlos is running hard, he's running behind his pads, he's breaking tackles, he's doing a good job of finishing his runs," Texans offensive coordinator Tim Kelly said. "Everybody is involved in it, but, yeah, Carlos is doing a great job of really running hard, bringing a physical element to our offense.