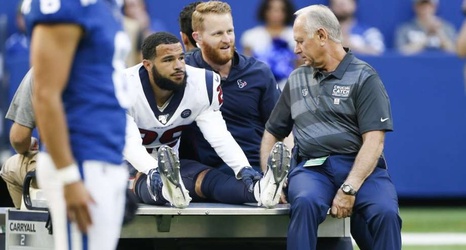 Texans cornerback Phillip Gaines will undergo season-ending surgery for a severe high-ankle sprain suffered Sunday against the Indianapolis Colts and will be placed on injured reserve, according to a league source not authorized to speak publicly.

Gaines is facing a five-month recovery time, per a source.

Gaines is a former Rice standout, a two-time All-Conference USA selection who holds the all-time school record for passes defensed.

Signed earlier this season when the Texans cut Aaron Colvin, Gaines was starting with Bradley Roby and Johnathan Joseph dealing with injuries the past few games.

The Texans traded a third-round pick to the Oakland Raiders to acquire former first-round corner Gareon Conley on Monday, according to league sources not authorized to speak publicly.