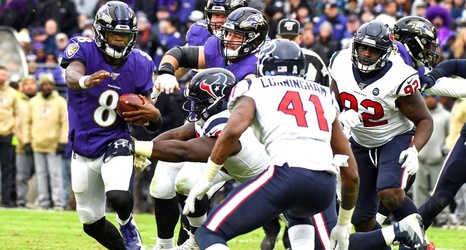 HOUSTON -- When the Houston Texans and Baltimore Ravens played in Week 11 last year, it was billed as a thrilling matchup between two young quarterbacks contending to be the NFL’s Most Valuable Player. Instead, it became the Lamar Jackson show. He outplayed Deshaun Watson -- and cemented his MVP status -- in what turned out to be the Texans’ worst defensive performance of the season, a 41-7 loss.

For Houston, the performance was similar to how the Texans played in the 2020 season opener last Thursday. They were overmatched in a 34-20 loss to the defending Super Bowl champion Kansas City Chiefs, allowing long drives, tackling poorly and conceding too many third-down conversions.