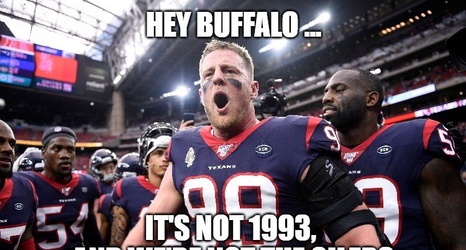 Texans fans are celebrating their team's third playoff win in franchise history - a 22-19 overtime win over the Bills on Saturday - but things didn't look too great for most of the first three quarters.

The Texans trailed Buffalo 16-0 late in the third quarter, but then Deshaun Watson caught fire. He led the Texans to 19 straight points and came through with the play of the season in overtime when he escaped two defenders and hit Taiwan Jones for a big gain that set up the game-winning field goal.

As the Texans celebrated that victory, they also saw the Patriots lose to the Titans, which means the Texans are headed to Kansas City for their second-round playoff game next Sunday.