Houston Texans: Wires hard to untangle in search for GM 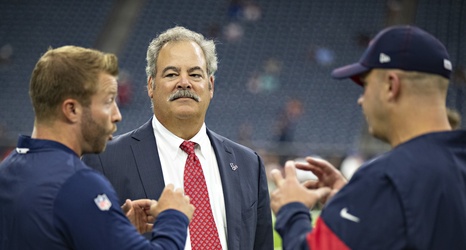 HOUSTON, TX - AUGUST 29: Owner Cal McNair and Head Coach Bill OBrien of the Houston Texans talks before a game with Head Coach Sean McVay of the Los Angeles Rams during week four of the preseason at NRG Stadium on August 29, 2019 in Houston, Texas. (Photo by Wesley Hitt/Getty Images)

The Houston Texans have a lot of work ahead of them this offseason.

When the 2016-17 NFL season ended, there was only one hole in the Houston Texans team. They had one of the scariest defenses in the league — if not the scariest — led by AJ Bouye, Jadeveon Clowney and Whitney Mercilus, and that group of Houston Texans excelled despite the absence of J.