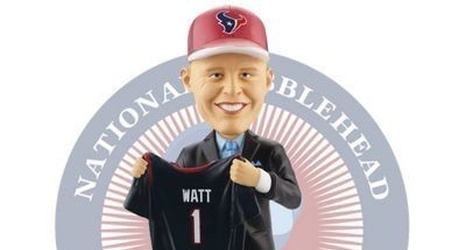 The National Bobblehead Hall of Fame and Museum just dropped an officially licensed, limited edition bobblehead featuring Houston Texans defensive end J.J. Watt after being selected in the first round of the 2011 NFL Draft out of the University of Wisconsin.

Once a question mark to Houston fans, Watt has blossomed into a terrorizing defensive end and one of – if not the – most popular player in Houston history.

The bobbleheads were produced for the National Bobblehead Hall of Fame and Museum by FOCO, an official licensee and manufacturer of Houston Texans and NFL merchandise.