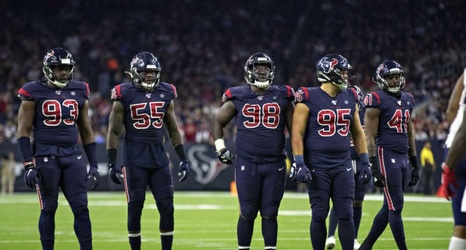 HOUSTON, TX - DECEMBER 1: Joel Heath #93, Benardrick McKinney #55, D.J. Reader #98 and Eddie Vanderdoes #95 of the Houston Texans at the line of scrimmage during the second half of a game against the New England Patriots at NRG Stadium on December 1, 2019 in Houston, Texas. The Texans defeated the Patriots 28-22. (Photo by Wesley Hitt/Getty Images)

The first player to opt out of the 2020 season for the Houston Texans is defensive tackle Eddie Vanderdoes — and his loss is not insignificant.

With NFL training camps officially getting underway and an agreement finally in place between the league and the players’ association regarding COVID-19 protocols, more and more players are beginning to opt out of the 2020 season.