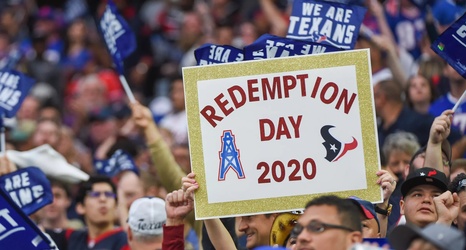 Hey miss Mary we got ourselves a bloody reunion. Ben Jones. Jadeveon Clowney. Mike Vrabel. Dennis Kelly with his nerd brother calling the plays on the other sideline. It’s Texans v. Titans. It’s one city given a football team after a bad man made a decision two years before. It’s another city who turned grief into celebration once the league turned back to them again. It’s incest. It’s football. It’s hatred. It’s rivalry without the vital games to back it up. It’s Texans v. Titans.

Today, the Titans look to continue upon their 4-0 start, even after a COVID lockdown, by beating the Houston Texans, and Houston looks to prove last weekend wasn’t a fluke against a terrible defense, but an exorcism, a path to something more without Bill O’Brien around, in this week six match up against bitter rivals in a game that has lacked the backbone most rivalries have.