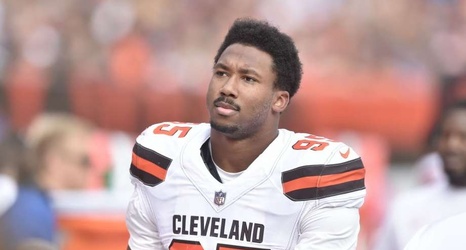 CLEVELAND (AP) — Browns star defensive end Myles Garrett has been reinstated by the NFL after he was suspended indefinitely for hitting Pittsburgh Steelers quarterback Mason Rudolph over the head with a helmet.

The former Texas A&M star missed Cleveland's final six games last season after his disturbing attack on Rudolph in the closing seconds of a Nov. 14 game that was nationally televised. Garrett has been remorseful since the incident and Monday he met with Commissioner Roger Goodell and league officials in New York.

Garrett is cleared to return to all activities with the Browns.

“We welcome Myles back to our organization with open arms," Browns vice president of football operations and general manager Andrew Berry said.