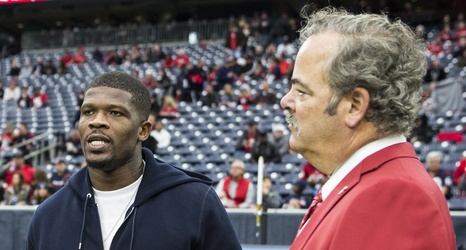 A few months after the usually reserved Andre Johnson took to social media to blast the Texans and team executive Jack Easterby, the Texans legend was at it again on the latest episode of the I Am Athlete podcast, released Monday.

In the 72-minute episode, the hosts - former NFL stars Brandon Marshall, Chad "Ochocinco" Johnson, Channing Crowder and Fred Taylor - ask Johnson about his Jan. 12 tweet that shredded Easterby and implored Deshaun Watson to "stand his ground" in demanding a trade.

SEAT'S TAKEN: The Houston restaurant with a spot reserved for anyone except Texans' Jack Easterby

Johnson said he was at lunch with his agent Kennard McGuire when he sent out the tweet that shook Houston.