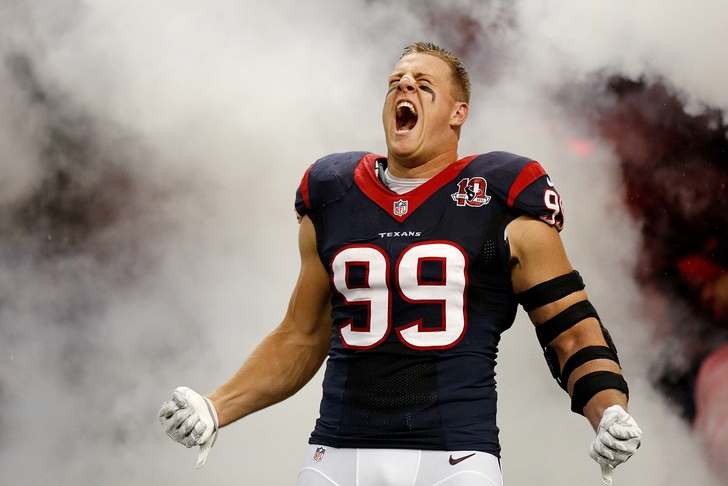 The Texans started the season well, winning their first two games. However, things went downhill quickly after that as they lost their last 14 games to finish 2-14. For a team that was projected to compete for the Super Bowl, firing head coach Gary Kubiak with three games left in the season was not the intended outcome. Houston and new head coach Bill O’Brien have the first overall pick, with a glaring need at quarterback. The team has shown a tendency to take prospects from BCS schools in recent drafts.

1. Quarterback: Case Keenum and Matt Schaub both started eight games last season, and neither was particularly impressive. Schaub has a big contract, and might be a post-June 1 cut. Keenum and T.J. Yates are probably nothing more than backups. With O’Brien coming on board, he’ll likely want to bring in a QB of his choosing.

2. Right Tackle: The Texans are set at left tackle with a stud in Duane Brown. Houston started Derek Newton at right tackle all season, and was one of the worst right tackles in the NFL, according to Pro Football Focus (Subscription required). Brennan Williams was a third round pick out of North Carolina last season, but didn’t play in a single game and is a complete unknown. The Texans could be in a great spot to take an offensive tackle at the top of round two.

3. Safety: The Ed Reed signing was a disaster and Daniel Manning getting hurt was a major blow. D.J. Swearinger is young and raw, but has potential. Shiloh Keo was the Texans’ best cover safety according to Pro Football Focus, which isn’t a good thing. The Texans greatly miss Glover Quin and need a centerfield-type player. An upgrade is needed, but might have to come in the middle rounds unless someone slips.

T-4. Inside Linebacker: Brian Cushing is no doubt very talented, but has suffered season-ending injuries the past two years. Daryl Sharpton is great against the run (second best according to Pro Football Focus), but awful against the pass (52nd according to Pro Football Focus). Joe Mays isn’t an ideal starter, and both he and Sharpton are impending free agents. Outside linebacker Brooks Reed has been rumored to move inside for sometime and the Texans could invest in a mid-round pick in the position.

T-4. Outside Linebacker: Whitney Mercilus has potential, but he still needs to continue developing. The aforementioned Reed is probably a better fit inside, as he has struggled getting to the passer. The Texans spent a third round pick on Sam Montgomery, but that failed quickly. The Texans could spend a Day 3 pick on the position.

Teddy Bridgewater, QB, Louisville: Bridgewater is the best quarterback prospect in this draft and the Texans happen to have a huge need at the position. Bridgewater was impressive in his bowl game and is the best bet at getting a franchise quarterback this year. Barring a shocking turn of events, such as a trade or stroke of organizational ineptitude, Bridgewater should be the No. 1 pick.

Cameron Erving, OT, FSU: Erving has spent just two years as an offensive tackle, as he arrived at Florida State as a defensive lineman. He is still raw in several areas, such as technique and pass blocking, but has plenty of potential. He has played left tackle for Florida State, but might be a better fit as a right tackle. He might not be available when the Texans pick in round two.

Antonio Richardson, OT, Tennessee: Richardson is nicknamed “Tiny” although he is anything but tiny, as he is listed at 6-foot-6, 327-pounds. He can play either tackle spot at the next level. If Erving isn’t on the board at the top of round two, Richardson might be.

Ed Reynolds, S, Stanford: Reynolds is among the top safety prospects in the draft, with a solid chance to be the third one drafted. He might not be worth the Texans’ second round pick, but if he is still on the board in round three, taking Reynolds would make sense.

Tevin McDonald, S, Eastern Washington: McDonald is talented, but was kicked out of UCLA, so he has some character concerns. He was only a third-team All-Big Sky Conference selection this season. If the Texans wait for a safety, McDonald makes some sense.

Shayne Skov, ILB, Stanford: Skov would be a great fit alongside Cushing. His weakness is in coverage, but he is great in run support and plays downhill. He has a fascinating backstory. He probably will be drafted between the Texans’ second and third round picks, but if he slips to the third round, the Texans might pull the trigger.

Yawin Smallwood, ILB, Connecticut: Smallwood is one of the better coverage linebackers in the draft, which fits exactly what the Texans need. Although lesser known than Skov to most fans, Smallwood might be the better prospect. He will likely go in the same range as Skov too.

Devon Kennard, OLB, USC: Kennard has started at outside linebacker, inside linebacker and defensive end for USC. Morgan Breslin gets most of the hype, and rightfully so, but Kennard has potential as pass rusher. Like Shembo, Kennard should be a Day 3 pick.