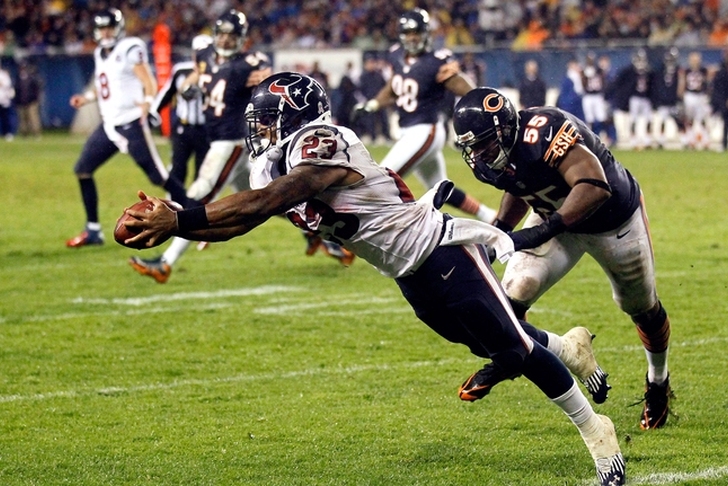 The Houston Texans are only a QB away from competing for the AFC South. They've got a more complete team than the Colts, but Andrew Luck more than makes up the difference. The lack of a QB also hurts the Texans' fantasy football options. Arian Foster is a still a strong RB and DeAndre Hopkins emerged last year.

He's got the arm to at least be intriguing, but there isn't any reason to invest in him.

Even if he wins the starting job, he's not worth drafting.

Despite missing three games, Foster was a top five running back last season. The danger is he that he'll be 29 by the time the season starts and there is some injury risk. His production could drop off at any time, but he's worth taking in Round 1.

Blue has played very well in place of Foster. He's only a handcuff though. If Foster gets hurt, sign Blue as fast as you can.

Hopkins finished 15th last year among fantasy WRs in his breakout season. He's got WR1 potential, especially if Houston finds a QB. He should finish around 15th again this year.

Strong was a steal in the third round of this year's draft. He'll replace Andre Johnson, but it might take some time. Poor QB play also limits his upside.

A veteran, Shorts' fantasy upside is limited. He'll compete with Strong for the No. 2 WR role, but might be best in the slot. He's not worth drafting.

See above and replace "Shorts" with "Washington."

He caught only four passes last year, but the former third round pick at least has some long-term upside. He's not worth drafting in any leagues yet.

Keep it here for all your Fantasy Football needs and Houston Texans news.