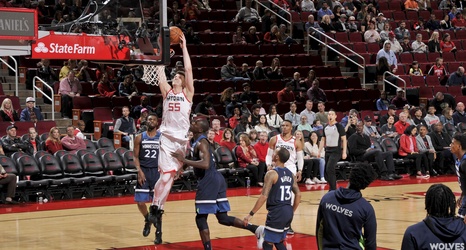 It was a total team effort on Saturday as the Houston Rockets had eight players score eight or more points on the way to a 139-109 annihilation of the Minnesota Timberwolves. Behind a scorching 51.6 percent shooting, Houston led by as many as 41 points in the contest, winning all four individual quarters.

After shooting just 27.5 percent from the outside in Oklahoma City, James Harden and company shot 40 percent, going 18-for-45. Despite Clint Capela being out with a heel injury and P.J. Tucker having an injury scare two minutes into the game and missing the rest, the Rockets had plenty of firepower from just about everyone that received minutes.