Rockets fall to Raptors in Japan 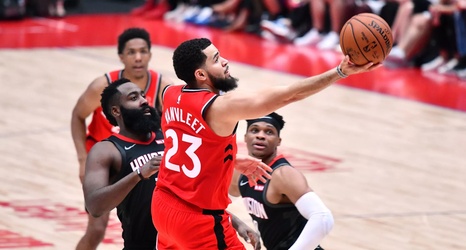 The Houston Rockets dropped the opening contest of a two-game series in Japan with the Toronto Raptors, falling 134-129 in a game in which they led by 17 points at one time.

James Harden had a dominant 34 points and 7 assists on 11-14 shooting in just 27 minutes of action to help the Rockets build a big lead and take a 7-point lead into the the final frame, but the benches were cleared for the entire fourth quarter, when the Raptors initiated most of their comeback against backups.

Russell Westbrook saw his first action in a Houston uniform and was a mixed bag, finishing with 13 points and 6 assists on 4-10 from the field.