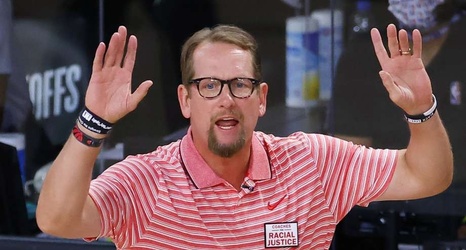 LAKE BUENA VISTA, Fla. (AP) — Nick Nurse was voted NBA Coach of the Year on Saturday after leading the defending champion Toronto Raptors to another 50-win season, this time without Kawhi Leonard.

Nurse, who has the Raptors on the verge of the second round of the playoffs, was a runaway winner, receiving 90 first-place votes from a panel of 100 sportswriters and broadcasters. He finished with 470 points.

Milwaukee's Mike Budenholzer was second after leading the Bucks to the best record in the suspended season, earning 147 points. Oklahoma City's Billy Donovan (134) was third.

Nurse led Toronto to its first title last year in his rookie season, becoming the only coach to win an NBA championship and a G League championship.