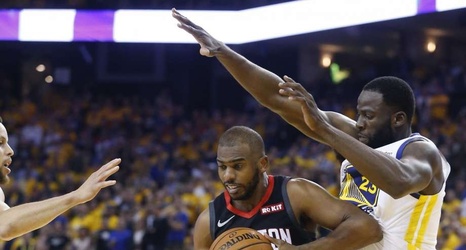 Houston Rockets guard Chris Paul (3) is surrounded by Golden State Warriors guard Stephen Curry, left, and forward Draymond Green (23) during the first half of Game 5 of the NBA Western Conference semifinals at Oracle Arena on Wednesday, May 8, 2019, in Oakland.

Mario Elie, who hit one of the biggest shots in Rockets history with his 3-pointer to beat Phoenix in Game 7 in 1995, said James Harden and Chris Paul need to be better for the Rockets in Game 6 tonight vs. the Warriors.

"The last three games, James has been playing like regular-season James, but the Utah series and these first two games — I know he got hit in the eye — but he's been average.