Joel Embiid too much in Houston as Rockets lose to 76ers 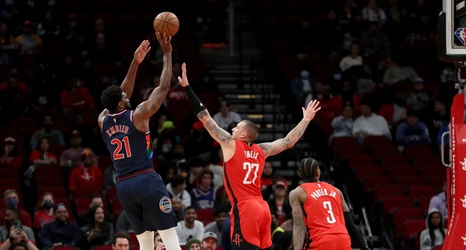 HOUSTON — At the 2:40 mark of the second quarter, Jae’Sean Tate attempted his best Hakeem Olajuwon impression. Tate went one-on-one with Joel Embiid down on the baseline and completed his best Dream Shake impression as he scored on the All-Star center.

Tate’s basket was the highlight of the night for the Houston Rockets. But if there was anyone who gave their best Olajuwon imitation — it was Embiid.

Similar to the way Olajuwon dominated the paint for 17 years in Houston, Embiid was an unstoppable force inside the Toyota Center with 31 points, eight rebounds and six assists on the night.