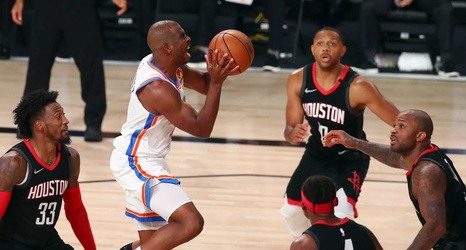 The Houston Rockets and Oklahoma City Thunder are now in a best-of-three series, in which the “home” team has won all four games so far. The old wisdom is that a series doesn’t start until the road team wins a game, but of course none of that matters here. Or does it?

The Rockets, particularly James Harden, got sloppy and tired late in the game. Their legs were not under them in the fourth quarter, and the shooting stats prove that. At a time where Houston should have been driving and forcing the issue, they settled for deep looks.