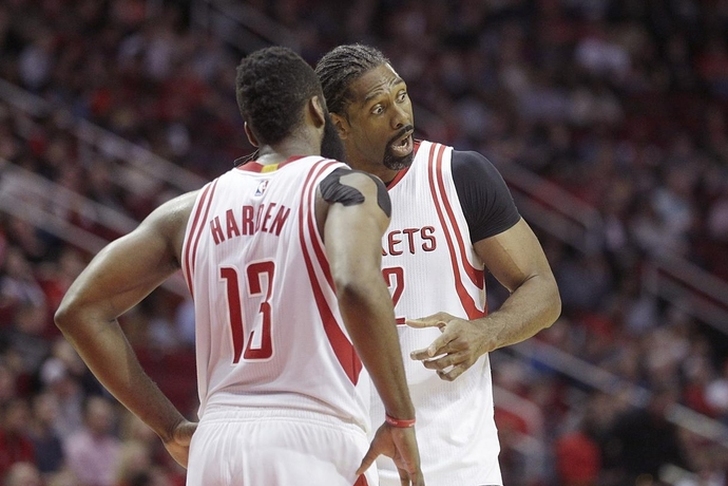 It wasn't pretty, but the Houston Rockets took a commanding 3-1 series lead over the Oklahoma City Thunder with a 113-109 comeback win.

Russell Westbrook (10-28 shooting) and James Harden (5-16) both struggled from the field in this one, but Houston's bench did more than enough to carry the load. Nene finished with a team-high 28 points (on 12-12 shooting) and 10 rebounds, while Lou Williams and Eric Gordon each dropped 18 points apiece.

Harden finished with 16 points, eight rebounds and seven assists, but came up big down the stretch as another dominant fourth quarter from the Rockets resulted in the win.

As has been the case all series, the Thunder started incredibly strong. Westbrook recorded a triple-double in the opening 24 minutes as OKC built a double digit lead, and they were able to answer every run the Rockets went on to maintain a good advantage through the first three quarters.

.@dougmcdermott's block leads to a runout and a MONSTER throwdown by @JeramiGrant on the other end! #ThunderUp #NBA #NBAPlayoffs pic.twitter.com/tHmkySCyJp

OKC gets the steal and @RealStevenAdams drops the HAMMER on the other end! #ThunderUp #NBA #NBAPlayoffs pic.twitter.com/eUsq6SeFpv

Of course, the Rockets have dominated the fourth quarter in this series and finally took the lead at the start of the final frame on the heels of a 12-2 run. The two sides then traded the lead back and forth for a few minutes before Houston took a sizable lead by using the "Hack-a-Roberson" strategy.

Andre Roberson, who shot 42 percent from the free throw line this season, finished the game just 2-12 from the charity stripe, resulting in several empty possessions for the Thunder. That edge - plus a few clutch shots from the Rockets - allowed Houston to get the win.

This late bucket from @Nene10 secured the win for the #Rockets! #NBA #NBAPlayoffs pic.twitter.com/jioxVsb5kX

Westbrook finished the game with 35 points, 14 rebounds and 14 assists for his third-straight triple-double. "The others" also stepped up as Steven Adams finished with 18 points, while Victor Oladipo had 15 points and Roberson had 13 points and a game-high five blocks.

Game 5 of this series will be back in Houston on Tuesday at 8:00 pm ET on TNT.