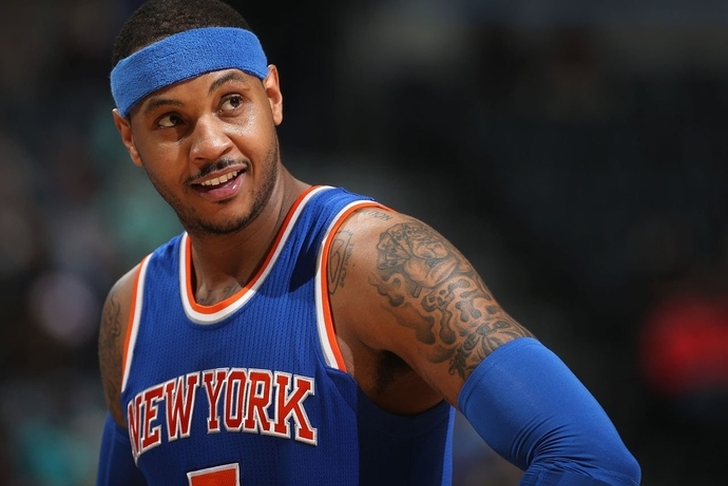 The Houston Rockets have already pulled off a blockbuster trade for Chris Paul and they aren't done trying to make moves yet in NBA Free Agency. Among the players they're linked to are Carmelo Anthony and Andre Iguodala. The Rockets are also in the middle of an unusual situation with Nene Hilario. Here are the latest Rockets Rumors you need to know.

Deal With Nene Is Off
In an unusual situation, the Rockets previously agreed to deal with center Nene Hilario is off.

Free agent Nene is very disappointed about his $4 million drop in expected contract & is "back at square one in free agency," a source said. https://t.co/FiVWzbl6Ou

At the moment, free agent center Nene is not interested in re-signing to a three-year, $10 million deal with the Rockets. Market back open. https://t.co/ndRx4oqBgz

Hilario has previously agreed to a four-year, $15 million deal with the Rockets. However, because of the "over-38" rule, the Rockets weren't able to sign Hilario to that contract. Hilario doesn't want the three-year, $10 million deal and now the Rockets will need to find a way to get him to sign off on a new deal or replace him.

Rockets And Iguodala
The Warriors forward is taking visits and it seems like there's a real chance he'll leave the Warriors. His next visit is with the Rockets.

The meeting between Houston Rockets and free-agent Andre Iguodala is scheduled for this morning, league sources inform ESPN.

Iguodala reportedly met with both the Kings and the Spurs when free agency began. He has numerous suitors and the Warriors' decision to re-sign Shaun Livingston (more on that below), doesn't bode well for his chances to return to Golden State State. Cap space is an issue for the Rockets with regards to signing Iguodala.

Iguodala has canceled the rest of his meetings after his visit with Houston.

Carmelo Anthony
The Knicks are trying to trade Carmelo Anthony and one of the top trade partners is the Rockets. Here's what Ian Begley of ESPN reports on the trade talks.

"Tthe Knicks and Houston Rockets touched base recently on a trade involving Anthony, per league sources, but talks didn't gain much traction," Begley writes. "One name that came up in discussions was Ryan Anderson, per sources. But the Knicks said at that time they weren't interested in Anderson, who has been shopped around by the Rockets."

Anderson has a hefty contract, so dealing Anthony for him doesn't solve the Knicks cap space issue they're trying to get out of by dealing Anthony. The Knicks want to trade Anthony and avoid a buy-out, but they might not be able to pull that off. If a buy-out happens, the Cavs are also in the mix.

Rockets Sign Zhou Qi
The Rockets have added some big man depth, agreeing to a deal with Zhou Qi. Adrian Wojnarowski of ESPN reports it's a multi-year deal with the Rockets, though the final terms haven't quite been finalized. The 21-year-old Qi was a second round pick from China in the 2016 NBA Draft.

Follow our Houston Rockets team page for all the latest Rockets Free Agency Rumors or download the Chat Sports App!