5 Things That Will Decide The Remainder Of The Rockets' Season 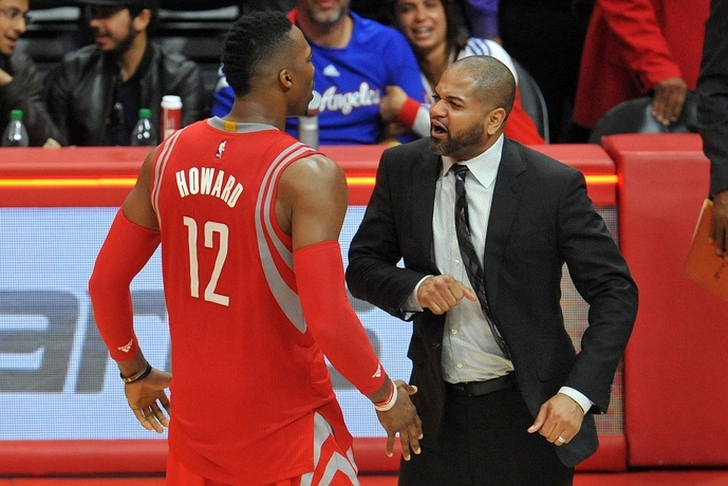 The Houston Rockets have stumbled out of the gate in 2015-16, posting a 5-8 record while dealing with a host of issues, including a change at head coach. What do the Rockets need to do to get back to the level which led them to a Western Conference Finals appearance last year? Here's 5 Things That Will Decide The Remainder Of The Rockets' Season.

Houston is flush with talent. They're also seemingly missing a special "something" that could be the answer to all of their early-season struggles. 20 years ago, the team was going through a similar level of malaise before trading for Clyde Drexler. Will they pull off a similar level of deal this year.

The Rockets need to start running the ball through Howard with more regularity. He's hitting at over 60% on the block, but there are times where the Rockets decide to leave him lingering in the post and settle for mid-range jumpers. If the Rockets are going to win the West, they'll need to use Howard better.

James Harden has been his fantastic self during the team's slow start, averaging 28/6/6. As is usually the case with this team, Harden's going to need to play out of his mind for large stretches when the rest of the offense loses its way.

Houston's defense has been terrible with rookie Montrezl Harrell on the floor, posting a near 120 defensive rating. That's maddingly awful, and it's just one small example of a Rockets rotation that has been thrown out of whack by injuries and the upheaval of the coaching situation (more on that later). Solutions need to be hashed out, whether it's in house, via the D League or via trade.

Bickerstaff took over for Kevin McHale after he was fired, and he's been pegged as the Rockets' head coach for the remainder of the season. This is the chance of a lifetime for the 36-year-old son of NBA coaching lifer Bernie Bickerstaff. If J.B. can turn Houston around, he'll cement himself as a top-flight coaching option. It'll also mean that the Rockets survived a tumultuous start to the 2015-16 season.