U.S. escapes with narrow win over Spain to advance to World Cup quarterfinals 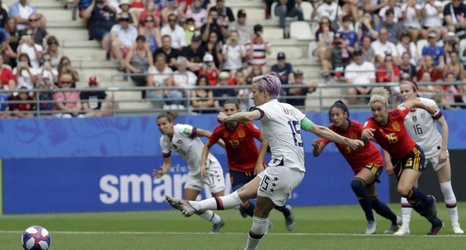 REIMS, France (AP) — Megan Rapinoe converted a pair of penalty kicks and the United States set up a much-anticipated quarterfinal meeting with host France at the Women's World Cup with a 2-1 victory over Spain on Monday.

Rapinoe's first came in the seventh minute to the cheers of the U.S. supporters melting in temperatures that reached nearly 90 degrees at the Stade Auguste-Delaune. They were quieted a short time later when Jennifer Hermoso tied it up for Spain with the first goal the Americans had allowed in France.

Video review was used to confirm a foul on Rose Lavelle that gave the pink-haired captain the game-winner in the 75th minute, spoiling Spain's spirited effort in its first knockout-round appearance at a World Cup.